Every so often a book comes along that you just HAVE to read. With If We Were Villains all of the shouts of ‘Donna Tartt’ and ‘A new Secret History’ meant I was desperate to read  this book, but also a little hesitant.

The Secret History comparison must have felt like a blessing and a curse to the author. It’s a fantastic connection to be made – and it’s certainly why I picked up the book – but it’s also a huge pair of literary shoes to try and step into.

Oliver Marks is released from prison after ten years. But did he kill his college friend, or not? Followed by the detective who was so certain of his guilt, Oliver is forced to look back. 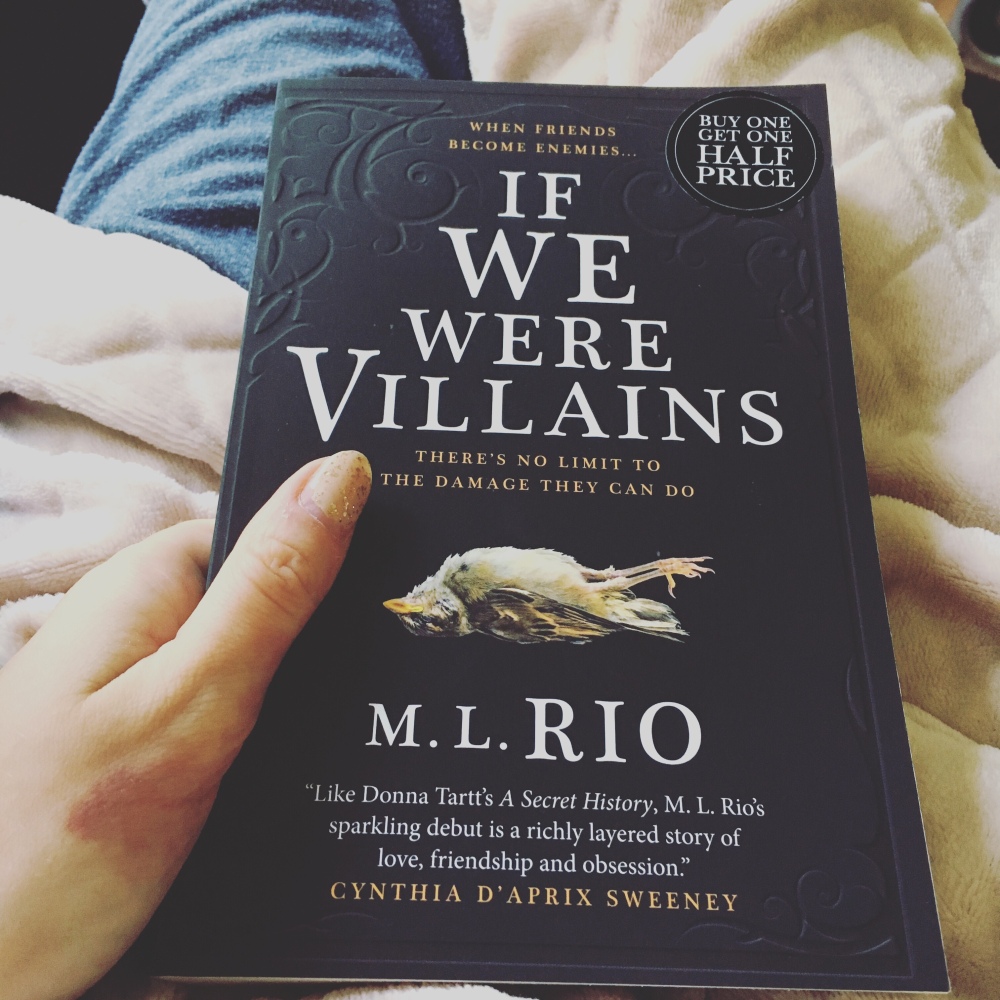 As Oliver tells his story, the world in which he inhabitants is dreamlike, nostalgic and surreal. Attending a university that he often compares to a cult, he studies Shakespearean acting with a small group of other up and coming acting stars. In this world, there are plays that merge into parties, conversations held in Shakespearean quotations and costumes that create a blurring between the real and the imagined.

The pace quickly picks up as tension builds between the students and it is clear where the story is going. The novel certainly follows a similar plot structure to The Secret History and I think it is undeniable that Rio has took at least some inspiration from Tartt’s work.

And it’s a daring structure, to begin with the twist and hold the readers attention. I can honestly say that I have never seen a writer carry off this structure as well as Tartt does. I still remember the first time I read The Secret History and the way that it pulled me along, I was compelled to keep reading.

If We Were Villains is a very well written novel, with interesting and realistic characters and a highly unusual setting. I love the use of Shakespearean language.

But – you guessed a but was coming – the beginning with the ending just didn’t quite work for Rio. Once we caught up with the death, the plot lost pull and quickly ran out of steam. While still well written and with some twists to come, the big twists were over in the first two thirds of the book. The final third has some plot twists, but not on the level of those that have gone before.

For the writing style alone I really enjoyed this book, but it just didn’t pack the punch of it’s literary inspiration. Perhaps this is simply a lesson in marketing – as soon as you take one of the greatest novels of all time and create a comparison, you create the potential that the reader is always going to be disappointed at least a little bit. Because the magic of books like The Secret History is that they are entirely original and they come along and surprise the reader with their tricks and twists.

If We Were Villains is still well worth a read and although I think reading without the Donna Tartt comparison will help, I am sure for Tartt fans the similarities are going to be tricky to ignore.